Waldo through the years - wsuarchives 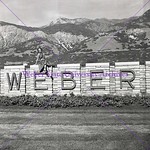 Waldo through the years

The nickname "wildcat" was first associated with Weber Normal College in a 1922 Weber Herald article about a basketball game against Davis High School. The nickname was also given to Wallace Morris, a football player on the 1923 and 1924 teams. A drawing of an unnamed wildcat mascot was introduced by Farrell Collett in the Signpost on November 22, 1946.
A photograph from the 1953 halftime of the Homecoming football game is the first photograph on record that has someone dressed up as a mascot. Another mascot costume would be used in the 1960s.
A live bobcat obtained by the Spirit Committee was used as a mascot from 1964 to 1968. The wildcat mascot name "Waldo" was first introduced in a 1964 ad in The Signpost.
An official costumed mascot, Waldo the Wildcat, was introduced in March 1968 at a basketball game in Montana after the live bobcat became too agitated at sporting events to be on display.
New costumes would be introduced around January 1980, 1987, 1998, and Fall 2012.
Read More